Hospitals in the San Francisco Bay Area are using robots called Tugs to take over many of the everyday tasks involved in tending to patients.

The bots are programmed to deliver food and drugs, pick up waste and laundry, and to travel the halls without crashing into people, according to an article in Wired.

It's clear, though, that the story's writer doesn't get a warm, fuzzy feeling from them. 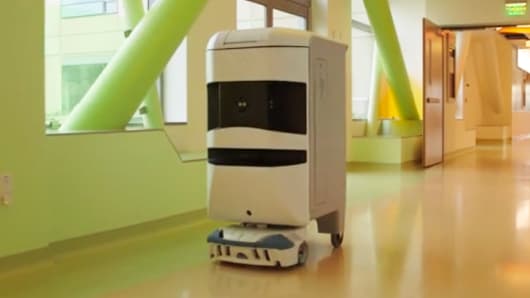 The University of California, San Francisco hospital recently began using the machines, and the nearby El Camino hospital has had a fleet since 2009. Hospital administrators say the rolling electronic porters can help bring down the "absurd" costs of health care in America, the article says, mostly by limiting the ranks of hospital staff.

Some say the bots are not cutting existing jobs, but rather are redirecting human labor to more fulfilling tasks and saving hospitals from having to add additional staff.

The Tugs travel using maps loaded into their "brains" and have other features, such as biometric security measures, to ensure the drugs they carry reach only the right doctors.

They are also built to be courteous - they beep softly as they roll down hallways to warn people of their approach. Of course, they aren't without glitches—they can be helpless, merely stopping in the middle of a trip if too many obstacles block their way.

Human hospital workers have already begun giving the robots childlike monikers - naming them after fruit or Disney characters. Costumes matching the names may be on the way: One hospital is already seeking Disney's permission to dress one up like a robot from the movie Wall-E.

Related: Bill Gates Is Worried About the Rise of Machines

Some call the new robotic assistants cute, some - including the Wired reporter who wrote about them - think they are a bit "creepy."

He said he finds the idea that they won't eventually steal jobs "laughable."

"We understand robotic technology is new for many, and like any new technology, it takes time for an organization to get used to it," Aethon, the manufacturer of the robot discussed by Wired, said in a statement to CNBC. "Our experience with our other hospital sites is they become accustomed to TUG quickly and it becomes a natural part of the working environment."

This article originally appeared in CNBC.