The stock market has inched its way to one record high after another this year, with the S&P 500 gaining a solid if unspectacular 3.5 percent so far. That rise has enriched investors by some $900 billion in 2015, as Matt Krantz at USA Today points out.

As Krantz also notes, though, some shareholders have done far, far better than the broader market. Jeff Bezos, for example.

The Amazon CEO has benefitted from a 40 percent rise in his company’s stock in 2015, adding a whopping $9.5 billion in paper gains to his already sizable net worth to lift it to $38.2 billion, good enough for 11th highest in the world, according to Bloomberg’s Billionaires Index. 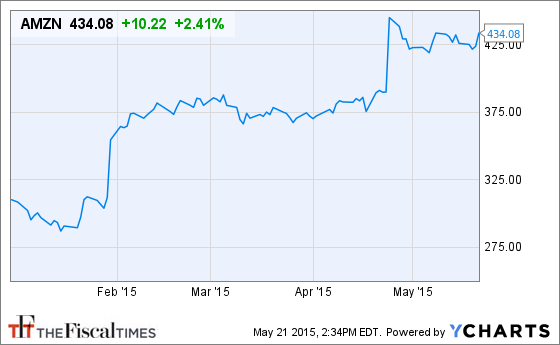 As well as Bezos has done, four foreign billionaires have actually made more in 2015: Pan Sutong, chairman of Hong Kong investment conglomerate Goldin Group, has made more than $20 billion; Wang Jianlin, the founder and chairman of another Chinese conglomerate, Dalian Wanda, has made $19.4 billion; Zhou Qunfei, China’s richest woman, has added nearly $11 billion; and Patrick Drahi, the French chairman and largest shareholder of Luxembourg-based telecom company Altice, has gained $9.7 billion.

Bezos may be far ahead of the U.S. pack, but the USA Today analysis of data from S&P Capital IQ shows some other CEOs of American companies have fared extremely well as a result of their stock holdings, too. Facebook’s Mark Zuckerberg has made more than $1 billion on paper, while Google’s Larry Page has gained just under $1 billion. And as shares of drugstore chain Walgreens Boots Alliance have surged more than 11 percent this year, acting CEO Stefano Pessina has profited to the tune of $645.6 million. The CEOs of salesforce.com, Under Armour, Starbucks, Mohawk Industries, Constellation Brands and Netflix have all seen paper gains of more than $260 million so far in 2015.

The federal government’s total non-defense discretionary spending – which covers everything from education and national parks to veterans’ medical care and low-income housing assistance – equals 3.2% of GDP in 2020, near historic lows going back to 1962, according to an analysis this week from the Center on Budget and Policy Priorities.

Chart of the Week: Trump Adds $4.7 Trillion in Debt

The Committee for a Responsible Federal Budget estimated this week that President Trump has now signed legislation that will add a total of $4.7 trillion to the national debt between 2017 and 2029. Tax cuts and spending increases account for similar portions of the projected increase, though if the individual tax cuts in the 2017 Republican overhaul are extended beyond their current expiration date at the end of 2025, they would add another $1 trillion in debt through 2029.

Chart of the Day: The Long Decline in Interest Rates

Reuters
By The Fiscal Times Staff

Are interest rates destined to move higher, increasing the cost of private and public debt? While many experts believe that higher rates are all but inevitable, historian Paul Schmelzing argues that today’s low-interest environment is consistent with a long-term trend stretching back 600 years.

The chart “shows a clear historical downtrend, with rates falling about 1% every 60 years to near zero today,” says Bloomberg’s Aaron Brown. “Rates do tend to revert to a mean, but that mean seems to be declining.”

Lawmakers are considering three separate bills that are intended to reduce the cost of prescription drugs. Here’s an overview of the proposals, from a series of charts produced by the Kaiser Family Foundation this week. An interesting detail highlighted in another chart: 88% of voters – including 92% of Democrats and 85% of Republicans – want to give the government the power to negotiate prices with drug companies.